In the beginning we will repeat process of creating and configuring empty project for the application which you have already done twice if you follow tutorials order. After that we will explain usage of existing widgets having forms/dialog boxes on the example of ColorDialog widget. You will also learn how to make your forms completely compatible with both dialog box and regular standalone modes.

We will start with preparing the Nitisa framework for working with it. If you were following our tutorials you already know how to do it and if you have already done this, you may skip this chapter.

Here we run build twice. First one for creating of the executable file of the Form Builder and second one for creating framework library files which we will link with our applications. Of course we could omit second build and use library files from the C:\Nitisa-9.0.0\bin\Windows\x86\ReleaseRT folder. But it is better to use debug libraries while creating and debugging your applications and then, when everything was thoroughly tested, switch to release version and build final applications working with best speed.

After preparing Nitisa framework we will continue with creating empty project for our application. If you were following our tutorials you already know how to do it. Anyway we will repeat it again so that tutorial be complete.

This simple process of empty project creation is always the same with Nitisa. The only differences that may be here is using different folders and Runtime Library option. You can even make such empty project once, export is as template, and then use the template as starting point of your applications.

Some existing widgets, as you might already observed, show dialog forms to receive user action. For example, FindDialog shows form for searching a text, SysOpenDialog widget shows a form for selecting a file, and so on. Some of such widgets can work both in dialog box mode and as standalone forms. They use form mode by default. One of these widgets is ColorDialog widget which is used to show color selection interface. Lets see first how to use it by default. 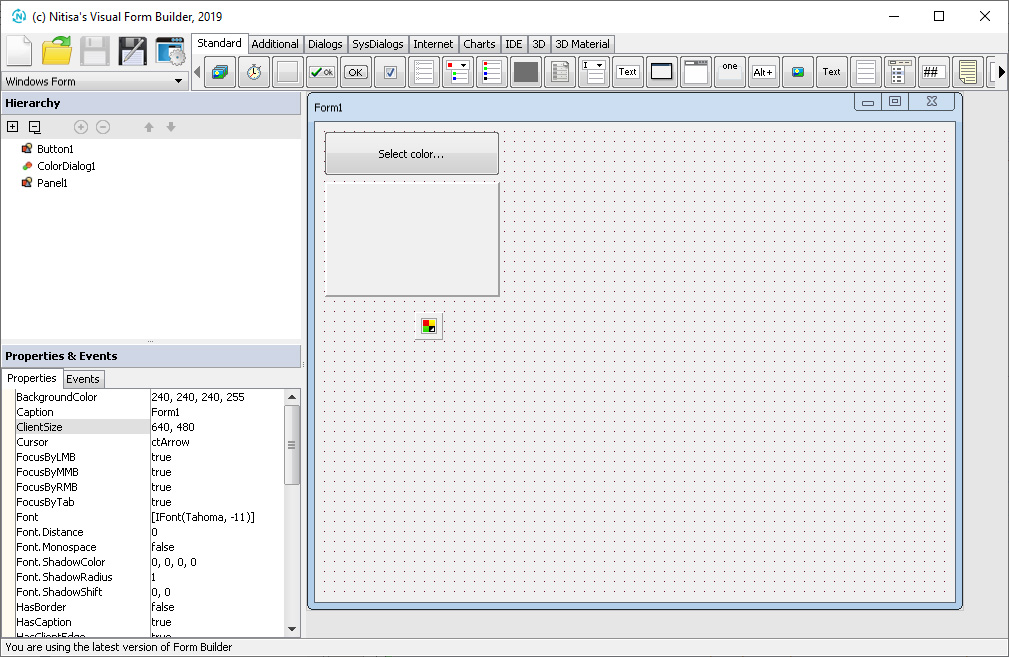 By this simple steps we created a form for our application which will show color selection dialog when user clicks on button and show selected color on the panel on the form.

Now switch to the Visual Studio with empty project we created earlier and do following:

This is how ColorDialog widget looks and works by default. As you may see it creates standalone form. You may move it wherever you want, even outside of the main form, even on another display. Additionally you cannot interact with the main form until you close color selection form.

First of all color selection interface looks a little bit different now. In dialog box mode it uses some widget as base class rather than a form. The widget for this purpose is called DialogBoxEx and is a part of Standard package. That widget has default layout different from a default layout of a form. That is the explanation of a little bit different view. You may also use this widget as a base when developing your own dialog boxes or use another ones available or create your owns.

Next difference is that color selection interface in dialog box mode can not be moved outside application form as you can see on the image above. As dialog box is just a widget it cannot draw itself outside form area.

And the final major difference is a user can still close, move, and resize application form although one cannot interact with form's widgets. This is standard behaviour but it can be changed if you like in any way you prefer.

Lets now see how to fix color selection accepting. Dialog boxes like forms have method Show() and ShowModal(). The first one works for both in the same way. The second one in case of a form waits until form closes and result of the method calling is the result with which form is closed but for dialog box it returns immediately. ColorDialog widget uses Color Form. In regular mode it is a standalone form while in dialog box mode it is implemented as dialog box. Method Execute() of the ColorDialog just uses the ShowModal() method of the form and thus it returns immediately in the dialog box mode in the same way the ShowModal() method does. To be informed when user accept color selection a listener may be used. Lets see how to add and use it.

That is how we can handle accepting color in dialog box mode of the ColorDialog widget. By the way, this modification of the code will also work if you change UseDialogBox property to false again.

As you may notice we still have some issues with color selection layout interface. Particularly we would like it to have the same background color as our main form have and if you take a close look you will see that its right and bottom distance from widgets to dialog box right and bottom borders differs from the distance to left and top ones. This is a common minor issue for all dialog boxes derived from DialogBoxEx when they were created via Form Builder. The issue raises from different default layout settings of a form and the DialogBoxEx widget. But there is an easy fix for it. Lets fix both this issues in the following way.

If you run application and clicks on Select color... button you will see the changes. Color selection interface background looks now more like the main form and its padding is equal from all the sides. 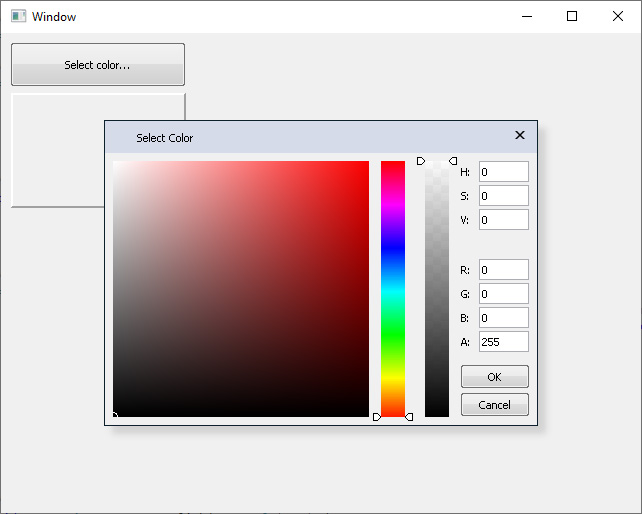 ! The only one important note we have here states that for optimization reasons dialog box of the ColorDialog widget, and all the widgets which uses dialog boxes, may not be accessible until its showing is requested. That is why we access it and change its properties and call its methods after calling Execute() of ColorDialog but not before.

And a final improvement here we would like to show is checking whether ColorDialog is in dialog box mode or not before accessing its dialog box as well as checking if Execute() method was called successfully. This final change makes our simple form completely compatible with both dialog box and standalone form modes and makes our code universal which means in does not require any changes when we change between those two modes. All is required in this case is building the project and that is all. You may also see that we added m_bDialogBoxAdjusted boolean type member(initially set to false in form's constructor) to prevent adjusting dialog box each time user clicks on Select color... button. This is an optimization trick as after the first adjustment dialog box remains in the proper state and no new adjustment is required.

This method shows using a listener. There is another method: using OnApply event of ColorDialog widget. We wanted to show you how to use listeners as all dialog boxes you will create and use have only listener method of getting information and have no corresponding events like in case of ColorDialog.

You can find source code of the project we just completed in the Windows → Tutorials → DialogBox folder of the Nitisa solution. It is called TestColorDialog.

If you like Nitisa project consider support it with a small donation or chose one of the paid plan to support further development.